Lawnmower App Invests In Bitcoins For You 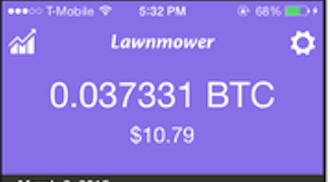 If you are into Bitcoins, chances are that you have tried to invest in them for both a short-term and long-term gain in value. While there has been some making a ton of money by being an early adapter, many of us have only been able to make a little profit, if any, by investing in Bitcoins for the sole purpose of investing.

Now there’s good news for those of us who wants to invest in the Bitcoin but never feel like we have a good chunk of cash to put aside for it. A new application has been launched, dubbed “Lawnmower”, which helps you invest in the Bitcoin every time you do a purchase with your credit card.

The application was introduced just last week and what it does is genius for those interested in investing small amounts daily, with higher risks but also potentially higher rewards. It basically tracks all of your credit card and bank transaction movements and rounds up the amount.

So if you are out in a cafe and spend $9.77 on a sandwich, it will round up the amount to $10 and use the remaning $.023 to invest in Bitcoins. While this is seemingly a small amount of money, with all the transactions that you might do over the course of a year or even several years, it can provide you with high-value investments in Bitcoins over time.

While there is no guarantees that the investments will give you any sort of profit, due to the volatile nature of the Bitcoin, it is a great tool for those of us who believes in the Bitcoins future and wants to continue to support it.

The application is meant as a tool for young investors and entrepreneurs, helping them invest without having a minimum amount of money that needs to be invested. It is also meant to appeal to the younger generation mainly, due to them spending a massive amount of time on their smartphones nowadays.

There is no fees for using the service per se, however as they have teamed up with Coinbase for the service, you will be subject to the standard exchange fees charged by them when you exchange your funds into Bitcoins through the application.

The team behind Lawnmower believes that they can help convert more mainstream people over to the usage of Bitcoins through the app, making it easier to get into the whole Bitcoin world without having to go through the troubles of explaining your bank what the Bitcoin transactions are for.

The application is already seen as a success as many young people have already signed up for the services and started using it. It is believed that more and more will use the application within a few months, which may lead to a higher demand for Bitcoins and thus increase the value over time.