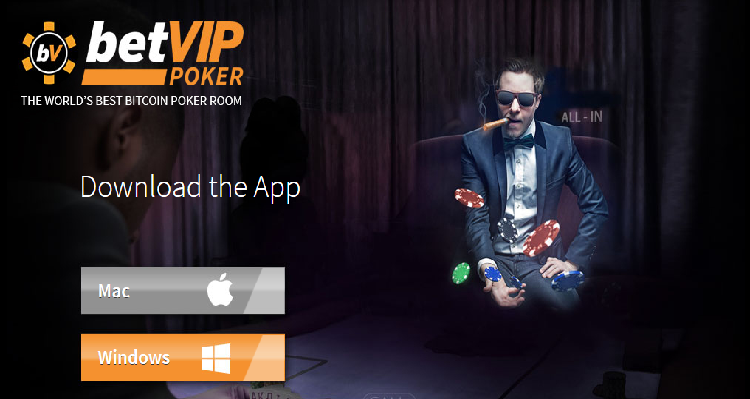 BetVIP became a Bitcoin house-hold name back in June of 2014, when they became the first licensed Bitcoin bookmaker, licensed in Curaçao under its laws and gambling regulations. Now the company has decided to branch out from their sportsbook and casino game offerings and offer their own independent poker room.

The poker room has been launched a few days ago and is Bitcoin only, just like with all other products offered by BetVIP. To ensure as many players as possible will have access to the room, BetVIP released both a Mac and Windows version of the software, which has been provided by Enterra Gaming.

Traffic has yet to pick up, which is natural from a newly opened room, but BetVIP will be offering players the chance to win some free Bitcoins through weekly freerolls. For those who are looking to deposit and play, BetVIP has integrated ‘instant’ deposits which means that once it has received three confirmations of the deposit it will credit it your account. This process will commonly take around 10 minutes or less and your Bitcoin will be exchanged at a ratio of 1BTC to 1,000mBTC.

BetVIP will also provide their fast cash out times known from their sportsbook and casino to the poker platform, allowing players to cash out within hours. Players will have the ability to be almost completely anonymous, having only to fill in an email to be able to create an account.

“The rapid growth of our business over the past year stems from the fact that users want a trusted, licensed bitcoin betting and gaming environment. The launch of BetVIP Poker enables players to enjoy an even wider selection of market-leading cryptocurrency wagering products on both Mac and Windows platforms,” Chief Executive Officer and Founder of BetVIP, Daniel Schwartzkoppf said.

“We have seen many users convert to BetVIP from fiat money currency platforms for the numerous benefits bitcoin offer. With low fees and strong identity protection, as well as rapid, simple and safe payments, bitcoin is the future of the igaming industry.” Schwartzkoppf added.

BetVIP’s launch of their own independent is coming at a great time, as the Bitcoin poker industry has seen its by far biggest poker room (SealsWithClubs) shut down, due to raids made by the Nevada Gaming Commission. While their board member and professional poker player Bryan Micon went ahead and launched a new site for the players (SwcPoker), it has not been able to collect anywhere near the traffic the old site had and many players are currently looking for other places to play these days.

At the same time the Bitcoin has regained some strengths in its value, having reached a value close to what it had three months ago. Currently the Bitcoin is valued at around $270-$290, having been down to around $200 which was the lowest since the beginning of 2013.

The Bitcoin is currently seeing massive growth in its amount of active users, with industry experts believing that it will reach five million active users by 2019. If the amount of active Bitcoin users continues to rise, so will the value and so will the Bitcoin gambling industry naturally, as more and more gambling sites and players continue to discover the benefits of using the cryptocurrency as a payment method.