A market abuse report has been filed against JPMorgan’s CEO after ‘spreading false and misleading information’ about bitcoin.

The report in question was filed by London-based Blockswater, an algorithmic liquidity provider. It was filed with the Swedish Financial Supervisory Authority against JPMorgan and its CEO Jamie Dimon.

According to Blockswater, Dimon violated Article 12 of the European Union’s Market Abuse Regulation (MAR) when he called bitcoin ‘a fraud.’

On the 12th September, Dimon took a shot at the digital currency stating that it ‘won’t end well’ and that it will eventually blow up.

He also said that he would ‘fire in a second’ any employee found trading in the digital currency for two reasons:

“It’s against our rules and they are stupid. And both are dangerous.”

After Dimon’s comments one observer noted that the cryptocurrency dropped in value. 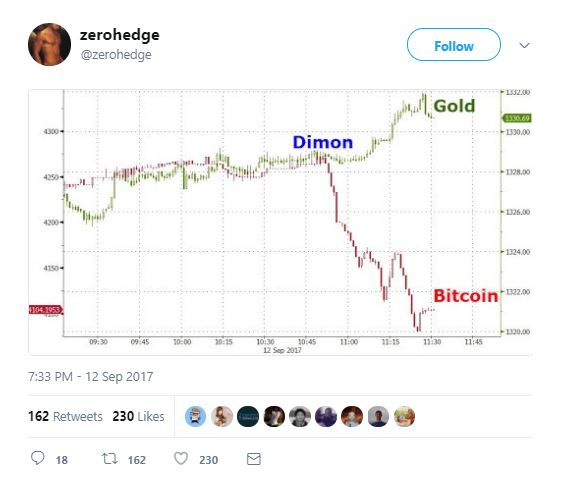 According to the complaint, Dimon’s comment impacted bitcoin’s price negatively as the ‘cryptocurrency’s price and reputation’ dropped.

It was added that Dimon ‘knew, or ought to have known, that the information he disseminated was false and misleading.’

Since Dimon’s comments questions have been raised as to why the bank handles bitcoin-related client trades. According to a report, most Wall Street banks use the Bitcoin XBT platform to act as agents for buyers and sellers. JPMorgan does so too.

Yet, a spokesperson for the bank said it doesn’t trade with its own capital.

“They are not JPMorgan orders. These are clients purchasing third-party products directly.”

Blockswater also claim that the bank traded bitcoin derivatives on Stockholm-based exchange Nasdaq Nordic for clients before and after Dimon’s comments. Schweitzer is of the opinion that it ‘smells like market manipulation.’

As a result, Schweitzer has asked the Swedish regulator to investigate. He notes in his complaint that market abuse in Sweden is punishable by up to two years in jail.

Interestingly, one wealth advisor believes that CEOs of major U.S. banks are ‘probably afraid’ of bitcoin and the blockchain.

“Of course, if you run a very large U.S. bank, most probably you are afraid of blockchain and bitcoin.”

His comments are in light of Dimon’s remarks about bitcoin. Preiss believes that due to a bank’s lack of transparency, cryptocurrencies are becoming a viable investment alternative for people.

“The concerns are about the fractional reserve banking system, and the balance sheet of the Federal Reserve at $4.5 trillion, where the Fed officially refuses an audit. On the other hand, on the bitcoin blockchain, you have an audit everyday because it’s open-sourced.”

Additionally, he believes that bitcoin remains ‘a good store of value.’ This is down to the fact that its price has risen from $7 to $5,000 since January, 2014. Bitcoin reached the $5,000 mark on the 2nd September when CoinDesk’s Bitcoin Price Index (BPI) recorded it at $5,010. Chinese bitcoin exchange OKCoin recorded the currency’s price at $5,149. At the time the combined market cap was worth nearly $180 billion. At the time of publishing, on the 21st September, it’s valued at $124.8 billion.

Since the announcement from China that it is outlawing initial coin offerings (ICOs) and cracking down on domestic digital currency exchanges, bitcoin has seen its price drop.

This is due to the fact that several prominent exchanges will cease their operations. At the end of September Chinese digital currency exchanges BTCC and ViaBTC will suspend their functions. Meanwhile, OKCoin and Huobi are expected to stop operating at the end of October. It’s believed this is because of the large number of users on the platforms and because neither had listed trading pairs for ICO tokens.

Yet, uncertainty still reigns within the market. As a result, the price of the currency has since dropped. At the time of publishing, it is trading at $3,647, which is an 8.22 percent drop in 24 hours. Subsequently, its market value is now worth $60.4 billion. Favourably, though, over a seven day period, its value has risen by 8.88 percent.

This is according to gold investor John Hathaway. He is the latest individual to speak out against the market in a new report.

Speaking with Kitco.com, a precious metal news and data site, the asset manager said simply that the cryptocurrency craze was simply ‘garbage.’

“It’s an absolute bubble – there’s no question in my mind that it’s in a bubble.”

Manager of the $1.2 billion Tocqueville gold fund, he added:

“Sure you can make money in bubbles any time but you have to get out. Let’s not forget that the total market value of these cryptocurrencies is $180 billion or so, maybe a little less now – that’s tiny compared to gold.”

Some have speculated that interest in bitcoin is taking away interest from gold. Mohamed El-Erian, Allianz’ chief economic adviser, is one such figure to voice these concerns. However, Hathaway doesn’t believe that’s the case.

“The idea that cryptocurrencies have somehow diverted interest in gold is baloney, it’s just not true.”

It remains to be seen whether Dimon does face any repercussions from his bitcoin fraud remark. However, he will be hard pressed to find people who don’t think his comments impacted the currency’s price and reputation.

For now, we just have to wait and see. There are, however, a number of factors affecting bitcoin’s price, which it’s currently struggling to recover from.